[The notes below are based on a biography written by Revd Esaia Williams, 19 April, 1935 CTA] 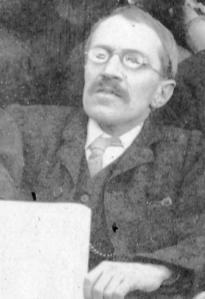 William Roberts was born on 1 October 1862 in a house called Farmers’ Arms, Bridge St., Cardigan. [ 21 Castle St.]. His father, John, was a native of Cardigan, raised up in St Marys St. A sailor by trade he spent his life at sea. His mother Mary, was originally from Rafael, near Blaenffos. They had four children: Mary Ann, another William who died young, Sarah Lizzie and William. Their mother died young and the children were brought up by their aunt Mrs Martha Roberts.

William was of small stature, a result of a childhood accident. He received his early education at the British School held at the old Bethania Chapel (Central Café). Edward Penfelyn (Iorwerth Penfelyn) was his schoolmaster, an exceptional man.

After leaving school William Roberts was apprenticed as a furniture maker with Griffith Griffiths, Castle St. He worked some years with David Lewis, Llanifor, Penparc, opposite the Eagle Inn, but because of his frailty he had to give up work as a carpenter. He eventually opened a shop in Bridge St. and remained there for the rest of his life. The shop, opposite Quay St.  was taken down c. 1933.

William Roberts was not noted for his public skills, but ‘no-one was more faithful in church. One of the dearest, harmless and gentlest of souls, but when called upon to stand on a principle, he could be as brave as a lion, and loud in his protest against sin in all its manifestations’.

He excelled as a musician. In 1882 some of the musicians in Bethania Chapel invited Mr Benjamin Lewis, Blaenannerch to arrange a sol-fa class. William Roberts joined. By the end of the season every member of the 50 plus class was able to read any tune at the first reading. Benjamin Lewis later migrated to America. After taking an interest in music he continued to study. His first instrument was a fife, then a fiddle. A travelling Italian wandered through Cardigan one day and was playing a harp. The music reached William Roberts’ ears and he managed to strike a bargain and persuade the Italian to part with his instrument. He then began to compose. He and others used to walk to Cilgerran to learn composition with the Revd W. Cynon Evans and his wife. (They later moved to Blaencwm, Rhondda). He was a founder member of the town’s orchestra. He was a faithful member of the Cardigan Male Voice Party, under the leadership of William Thomas, Carningli.

When the Revd John Williams, Bethania was returning from a service in Pembrokeshire late one evening he noticed a light on with William Roberts, and when he passed the window he tapped it with his whip. The following morning he went to visit William Roberts, and said: ‘What were you doing down so late at night? O! Mr Williams it was you. To tell truth I was putting the finishing touches to a tune on the words: ‘Anghrediniaeth, gad fi’n llonydd’

That tune was then called Bryngogarth after the Revd John Williams’ house in Napier Street.