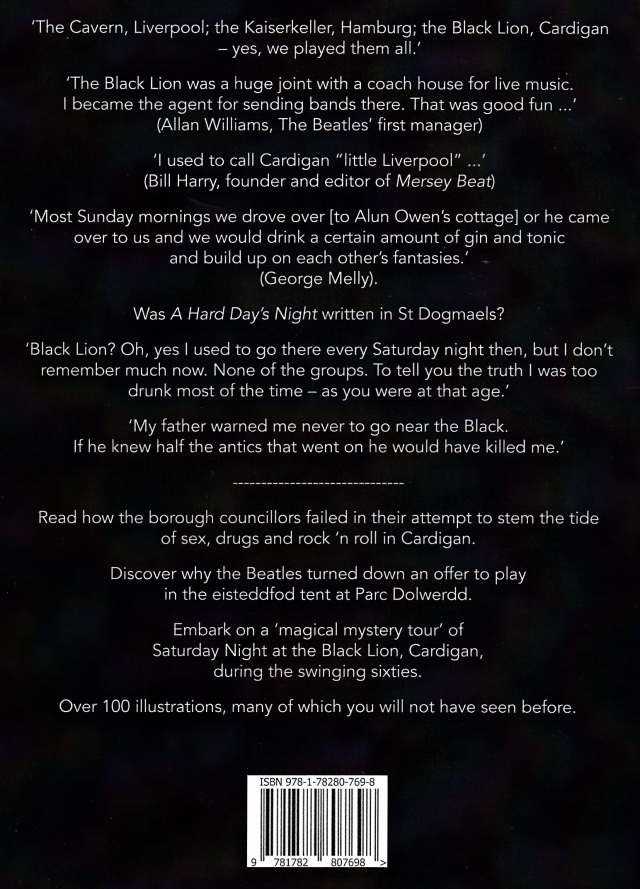 Cardigan in the Swinging Sixties! (back cover)

Is Cardigan ready for this?

It’s a remarkable story! The background is the close connection between some of the town’s characters and those linked with the emerging Liverpool music scene at the time. People like the dramatist Alun Owen, who came to live in St Dogmael’s between 1963 and 1967; Allan Williams, the Beatles’ first manager; Bill Harry, founder and editor of the pioneering Mersey Beat newspaper; Bob Wooler, the Cavern’s famous DJ; and George Melly, who bought a summer house in Pen-y-bryn. This motley crew, with their partners, were warmly welcomed by Frank Aspinall, of the Black Lion, and with their help organised Liverpool bands to play in the Black.

The book contains a complete list of all the groups who played there between 1963 and 1973. At first they came from the Cavern – many via the Kaiserkeller and other Hamburg clubs. Do you remember the visit of Screaming Lord Sutch to Cardigan? What about Rory Storm and the Hurricanes; Ian and the Zodiacs; The Clayton Squares; Vince Earl and the Talismen; Freddie Starr and the Nightriders; Sony Webb and the Cascades; Derry Wilkie and the Pressmen; The Kirkbys; The Masterminds; The Chessmen and The Kinsleys and many more?

Later the groups came from South Wales: do you remember James Hogg, The Iveys; Haverson Apricot; Peter Shane and the Vikings – and let’s not forget local groups including Ricky and the Raiders and Strawberry Maize?

Every Saturday night over 200 teenagers flowed into the town from a wide area of Cardiganshire, Pembrokeshire and Carmarthenshire to dance, to listen to music and to enjoy.

But not everyone was happy with these developments. Parents warned their offsprings not to go near such a place, and the respectable town councillors were unhappy that the Black gave the town a bad image.

Cardigan has not seen anything like this before or since.

Read the truth about the connection of the Beatles with the local Eisteddfod!

Read about the close link between ‘A Hard Day’s Night’ and St Dogmael’s.

You’ll be surprised to read the candid memories of those who were a part of the scene.

The year is 1870. Blodwen Morgan is twelve years old and a hundred years ahead of her time.

The photographs of Harry Squibbs