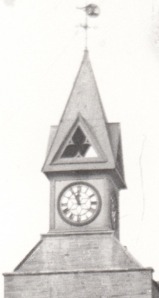 I bobl tref a gwlad

A hynny’n rhodd a rhad;

At 7 pm 100 gentry, tradesmen had a complimentary banquet at Black Lion. The room was beautifully decorated by flags, flowers. Mrs Trollip served a good spread. However the workers, Corporation labourers (total 40) had to make do with the Fat Ox. Nice one Mr D. Luke for providing such an excellent repast upon so short a notice.

Originally intented that the clock should only have 3 faces. This is referred to in verse: written by John Sharpe, Borough Surveyor.

All hail! thou latest chronicler of time!

Deign thy attention to my modest rhyme;

I have some little thing I want to say,

And could not hit upon a better way

Than to address them to you, for the lack

Of closer confidant. You can’t hit back.

And as for these my counsels- weigh them well!

And first, I’m very pleased to see you there

With face so bright and clean, and debonair-

Face did I say? Good gracious! You had three,

And each one as like the other as could be;

But then our Mayor, so anxious to do more

Refixed your inside gear and gave you four.

You cannot be two-faced, whate’er you do

The only thing you can be is two-too–

And two and two is four. And then, you see

That your fourth face must watch the other three

And should your High St face get fast and frisky

Or Mwldan go just slightly on the whiskey

And so lose time; your Pendre face must frown

And Priory Street face stare the offenders down

But what would happen if in spite of all endeavour

Your whole four faces should go wrong together

I can’t surmise; unless Tobit should wave his

Mace and give them in charge to Sergeant Davies.

The train won’t be here until tomorrow.

It was the following day (Wednesday) that the train started its journey from Cardigan. 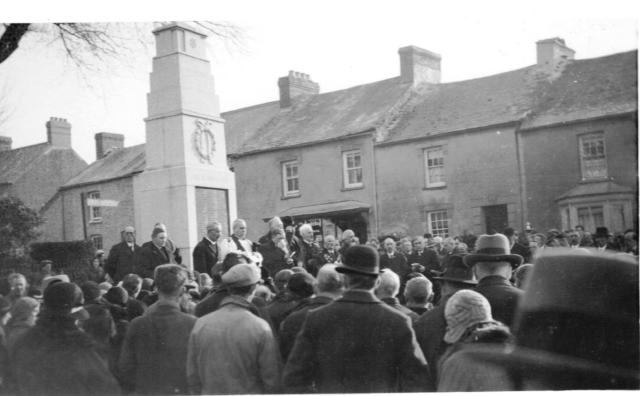 Remembrance Day 1932: Canon Hamer, David Williams, the mayor, John Davies?, one of the mace bearers and other.

Procession was headed by naval and military guard of honour, followed by local Scouts and Girl Guides, relatives of the fallen carrying floral offerings, Mayor of Cardigan, Ald Dan Williams, attired in his robes and chain of office, along with mace bearers, members of the Town Council, local magistrates, ministers of religion, and the general public.