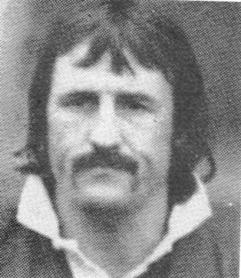 A slightly (!) controversial incident which gained further notoriety when Max Boyce wrote a song ‘Ringer was to blame’. As Max wrote: ‘He got there as fast as he could’.

Or as Wales prop Graham Price said of the game: ‘It was like World War Three but in them days referees didn’t tend to send players off, no matter what they did’.

“It was disgraceful refereeing,” recalls Ringer. “Their captain, Peter Wheeler, came over and said to the referee that if he didn’t send me off it would turn into a bloodbath. And that made up his mind for him.”

John Carleton, England winger: “I have discussed it time and time again and I am still not sure. He did run at John and he was quite high and there may have been some intent. But he did not make much contact.”

Ringer was banned for eight matches and failed to make the Lions Tour of South Africa.

He retired from the game in 1984 after a spell in rugby league playing with the Cardiff Blue Dragons.

Have you got one of these https://ianbone.files.wordpress.com/2013/03/file1-ringer.jpg

Paul Ringer is innocent badge  Wear it today with pride!